WARNING: This wiki contains heavy spoilers. Read at your own risk.

Welcome to the SukaSuka (終末なにしてますか？ 忙しいですか？ 救ってもらっていいですか？ , Shuumatsu nani shitemasu ka? Isogashii desu ka? Sukutte moratte ii desu ka?) Wiki, the unofficial comprehensive source of information on the SukaSuka series that anyone can edit. Please help our wiki by creating or editing any of our articles! 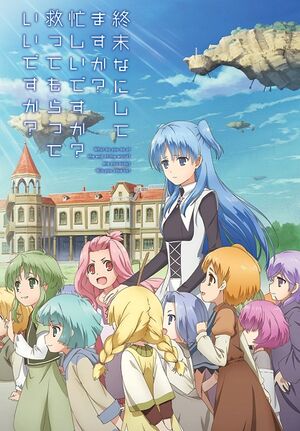 Humans have been driven to extinction by "Beasts." The duty of fighting the Beasts fall to "Fairies," who are destined to use their powers to wield "Holy Swords" called "Carillons" and eventually meet their destiny of death. A sole human being named Willem wakes up after several hundred years, and continues his fight against the Beasts.

WorldEnd: What Do You Do at the End of the World? Are You Busy? Will You Save Us? ''Characters

Elq Hrqstn
Add a photo to this gallery

WorldEnd: What Do You Do at the End of the World? May I Meet You, Once Again?

Suka Suka Manga Volume 4
Contribute to this Wiki!
To contribute a SukaSuka article, simply enter the article title in the box below:<createbox>

Retrieved from "https://suka-suka.fandom.com/wiki/Shuumatsu_nani_shitemasu_ka%3F_Isogashii_desu_ka%3F_Sukutte_moratte_ii_desu_ka%3F_Wiki?oldid=3461"
Community content is available under CC-BY-SA unless otherwise noted.